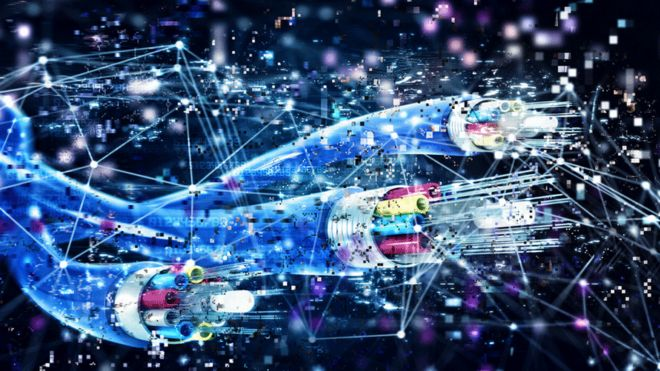 Full-fibre broadband should be fitted as standard in all new homes, the government has said.
The proposal comes as part of a new national telecoms strategy drawn up by the Department for Digital, Culture, Media and Sport (DCMS). Under its targets, all of the UK will have full-fibre broadband coverage by 2033, replacing the copper wire network that currently delivers the service.It proposes legislation to encourage more private infrastructure investment.

Earlier this month, research was published indicating that the UK has slipped from 31st to 35th place in the global broadband league tables, behind 25 other European countries.The data was collected by M-Lab, a partnership between Google Open Source Research and Princeton University's PlantLab, and the results compiled by UK broadband comparison site Cable.Government statistics suggest only 4% of UK premises have a full-fibre link - compared to 79% in Spain and 95% in Portugal.

Radical blueprint
We want everyone in the UK to benefit from world-class connectivity, no matter where they live, work or travel," said DCMS Secretary Jeremy Wright."This radical new blueprint for the future of telecommunications in this country will increase competition and investment in full-fibre broadband, create more commercial opportunities and make it easier and cheaper to roll out infrastructure for 5G.
"The DCMS said its plans would "drive competition and commercial investment in full-fibre networks across as much of the UK as possible".However, it acknowledged that in some parts of the country, it was unlikely that the market could deliver by itself.
As a result, the government would support investment in the most difficult-to-reach areas."We have already identified around £200m within the existing Superfast broadband programme that can further the delivery of full-fibre networks immediately," it added. The chairman of the National Infrastructure Commission, Sir John Armitt, welcomed the government's review, which he said echoed his commission's own recommendations. "As well as broadband, this plan will also leave the UK well-placed to introduce the latest 5G mobile technology," he added.
In a statement, UK infrastructure provider Openreach said it was "encouraged by the Government's plan to promote competition, tackle red tape and bust the barriers to investment."However, it said, the economics of cabling up the UK were "challenging" for all parties involved. It suggested a review of business rates could help get things moving. Andrew Ferguson, editor of the Think Broadband site, said the strategy turned visions of full-fibre coverage into "slightly firmer targets".However, he added, there was one "very important caveat" to the strategy which might slow the take up of full-fibre in the UK. In nations such as Spain, he said, full-fibre was the first decent broadband people were offered which meant people enthusiastically signed up."
Getting the UK to upgrade to full-fibre if they are getting decent speeds from a VDSL2 or cable broadband connection may be harder," he said, adding that how the packages were priced would be a factor in adoption.

Future use
Dana Tobak, head of full-fibre ISP Hyperoptic, said "education" would be an important part of the conversion process as installing the technology in homes and business typically involved more work than existing methods that rely on both copper and fibre."We do have to appreciate the physical and work element of full-fibre and we have found that consumers do not yet quite understand that," she said.However, she added, the opportunities for novel uses that full-fibre offered would make it an easier sell to many people. "It's not just about how fast we can download a movie," said Ms Tobak. "That's just a function of how we use it today. "This commitment from the government will get people building the applications of tomorrow," she said. "It will fundamentally change lives as we get used to it."